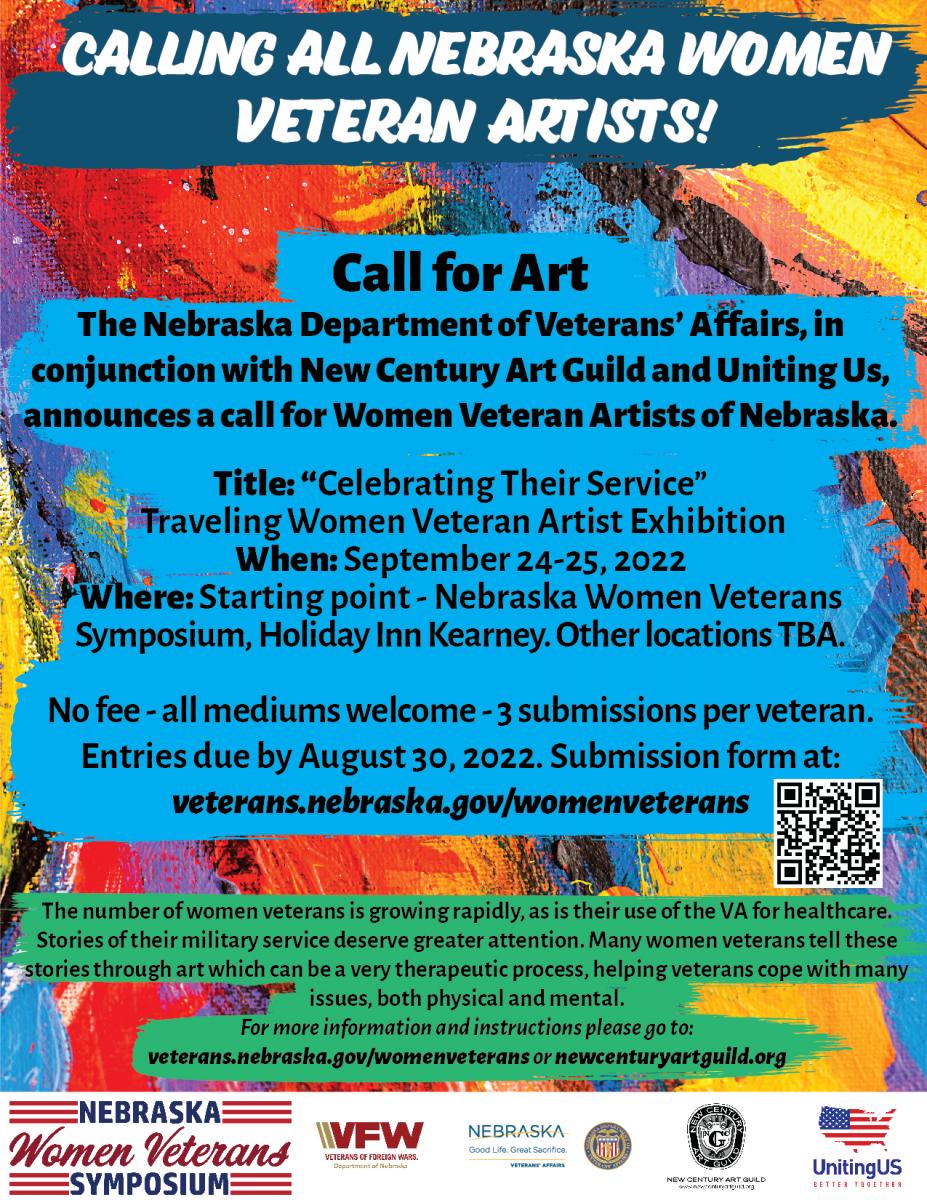 The Nebraska Department of Veterans’ Affairs (NDVA), in conjunction with New Century Art Guild and Uniting Us, announces a call for women veteran artists of Nebraska to submit artwork to the “Celebrating Their Service” traveling women veteran artist exhibition. All mediums are welcome, with three submissions allowed per veteran. Submissions are due by August 30, 2022.

“The number of women veterans is growing rapidly, as is their use of the VA for healthcare,” said NDVA Women Veterans Coordinator Erin Colson. “Stories of their military service deserve greater attention, and many women veterans tell these stories through art which can be a very therapeutic process, helping veterans cope with many issues, both physical and mental.”

The art exhibition’s starting point will be at the Nebraska Women Veterans Symposium at the Holiday Inn in Kearney on September 24-25, after which it will travel the state (future locations to be announced). A submission form and additional details are available at veterans.nebraska.gov/womenveterans. For questions about the exhibition or submitting artwork, please contact Erin Colson at Erin.Colson@va.gov or Troy Muller at TMuller@newcenturyartguild.org.

Nearly half of the 200 spots available for the free, two-day symposium for Nebraska women veterans have been filled. Registration is available at veterans.nebraska.gov/womenveterans and is open until the date of the event or when all spots are filled.

Past National Commander of the American Legion Denise Rohan, who was the first woman to be elected to the top position of the American Legion, will be the keynote speaker. Leaders in the women veterans and military community will take part in a panel discussion titled “Celebrating Who I Was and Who I’ve Become,” about the struggles women veterans face both while serving in the Armed Forces and while transitioning out of the service. Other activities include a journaling exercise with Warrior Writers, an art activity with New Century Art Guild, interviews for the Library of Congress Veterans History Project, and a screening of Lioness, a documentary about a group of female Army support soldiers who were part of the first program in American history to send women into direct ground combat.