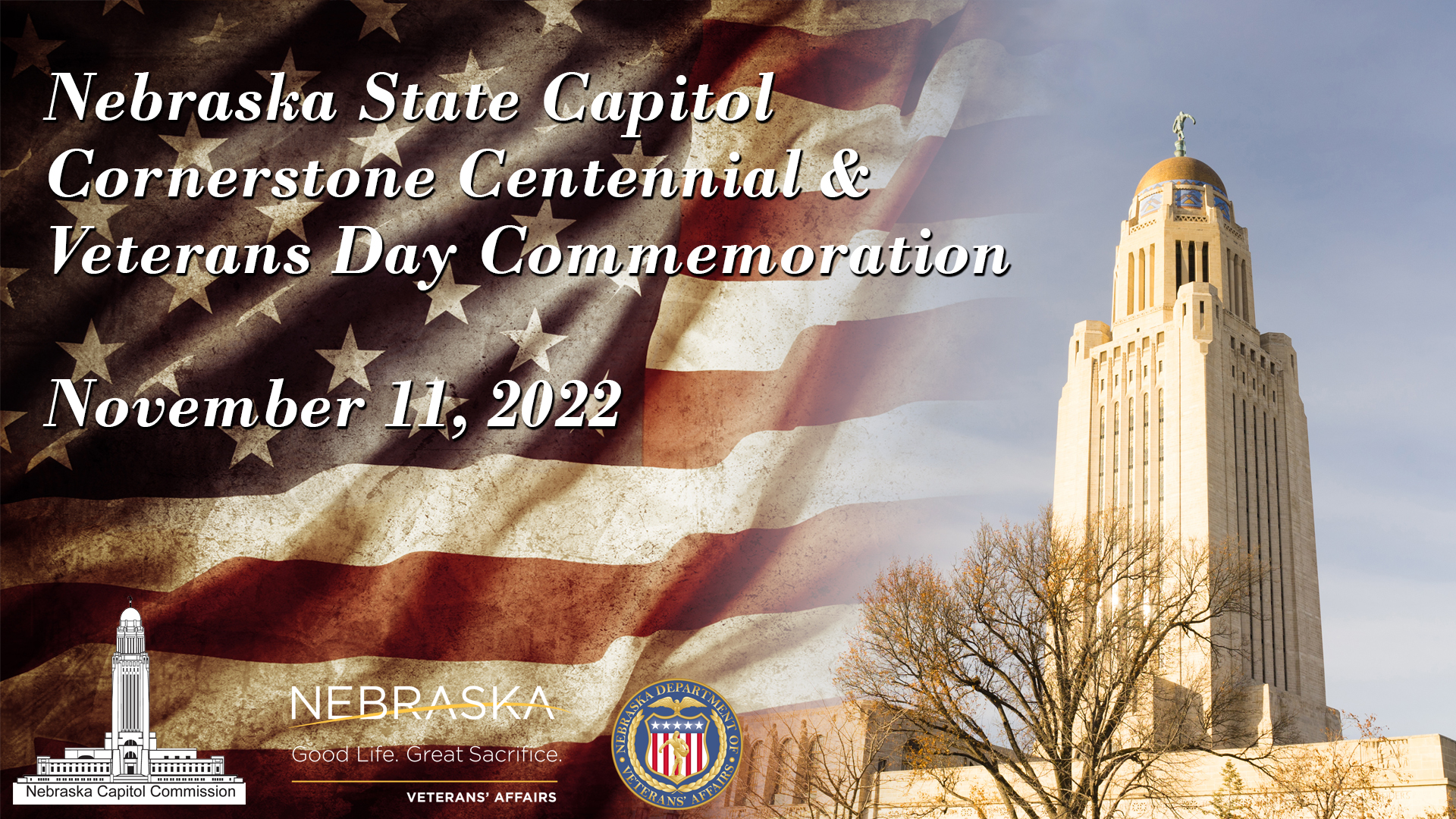 Secretary of State Bob Evnen will emcee the proceedings, and Capitol Administrator Bob Ripley will provide a brief history of Nebraska’s State Capitols, including information on the centennial of the laying of our current Capitol’s cornerstone.

Governor Pete Ricketts will deliver his Veterans Day message to Nebraska and sign a Veterans Day Proclamation. “One hundred years ago, Nebraskans rightly recognized that willingness to serve is a cornerstone of a free Republic,” said Gov. Ricketts.  “Our state has a strong tradition of military service, and our citizens make it a priority to honor our veterans.  The Veterans Day ceremony at the Capitol commemorates Nebraskans’ sacrifices through the years.  It also gives us the opportunity to thank the heroic veterans who call Nebraska ‘home’.”

NDVA Director John Hilgert will provide a message to Nebraska’s veterans and their families in honor of Veterans Day. “NDVA is honored to be part of the Capitol’s centennial commemoration,” NDVA Director Hilgert said. “I’m looking forward to joining my fellow veterans at the Capitol to reflect on its rich history and the Nebraskans who have stepped up to serve, to thank the veterans in our state today, and to look forward to how we can serve future veterans and welcome them home to Nebraska.”

Nebraska Adjutant General Daryl Bohac will give remarks and accept a ceremonial flag to rededicate our state’s Capitol on behalf of the men and women who have fallen in service to our nation since the Capitol’s original dedication on November 11, 1922. Wendy Adelson, the mother of Nebraska Marine Corporal Daegan Page who was killed in action in Afghanistan last year, will be presenting the flag.

“On Veterans Day we celebrate all who have served in our nation’s Armed Forces, and I cannot think of a more moving tribute to all Veterans past and present than to rededicate our State Capitol in honor of all the brave men and women who have paid the ultimate sacrifice in service to our country over the past 100 years,” said Major General Bohac.

Music will be performed by the United States Air Force Heartland of America Offutt Brass and the University of Nebraska-Lincoln University Singers. Color guard duties will be performed by Boy Scouts of America, Cornhusker Council Crew 21, who will be wearing World War I uniforms provided by the Nebraska National Guard Museum. Nebraska National Guard Chaplain (Colonel) Brian Kane will give the invocation and benediction.

The event is open to the public, though space will be limited. A live stream will be provided by Nebraska Public Media starting at 10:30 a.m. with prelude music performed by Offutt Brass and can be accessed at https://nebraskapublicmedia.org/en/series-media/non-series-video/capitol-cornerstone-veterans-day-program-50019877/.

The decision to build a third Capitol came immediately after World War I, and Nebraska’s tradition of volunteerism and dedication to freedom were mentioned in the 1919 competition statement for the new Capitol. The new Capitol was to be an outward symbol of the character of the state. Following the competition and 1920 selection of Bertram Goodhue as Capitol architect, site preparation and the installation of the foundation occurred. By November of 1922, the cornerstone was ready to be set. Just one year prior, on Armistice Day, November 11, 1921, the United States entombed an unknown World War I soldier at Arlington Cemetery. The Nebraska Capitol Commission and Nebraskans chose to honor their sons, brothers, sisters, and daughters who made the ultimate sacrifice to their country at the November 11, 1922, cornerstone laying ceremony by dedicating the Capitol to their memory.