Gov. Ricketts Designates US-20 as “Nebraska Medal of Honor Highway” 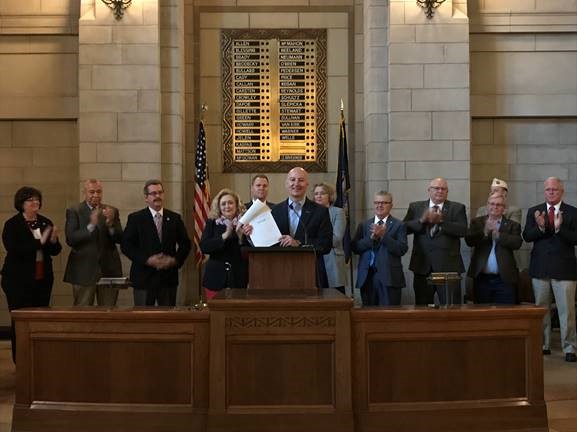 On Friday, January 31st, Governor Pete Ricketts signed paperwork to formally name Nebraska’s section of U.S. Highway 20 as the “Nebraska Medal of Honor Highway.”  The signing took place on Veterans Legislative Day, an annual event at the State Capitol for veterans and veteran service organizations to learn about veteran- and military-related legislation.

“Naming US-20 as the ‘Nebraska Medal of Honor Highway’ pays homage to our nation’s most heroic soldiers,” said Gov. Ricketts.  “It’s a fitting way for Nebraska to show respect and appreciation to our veterans for their sacrifices to keep us safe.”

The Nebraska Medal of Honor Foundation applied for the naming of US-20, which the Nebraska Highway Commission then recommended in December.  Nebraska Department of Transportation (NDOT) Director Kyle Schneweis signed the recommendation before submitting the name change to the Governor for approval.

By designating US-20 as the Nebraska Medal of Honor Highway, Nebraska joins a national effort to name US-20, which runs 3,365 miles from Boston, MA to Newport, OR.  Nebraska is home to 432 miles of US-20 and is the fifth state to formally adopt the Medal of Honor name.  Oregon, Idaho, Montana, and Wyoming have already named their sections, and efforts are underway in Iowa, Illinois, Indiana, Ohio, Pennsylvania, New York, and Massachusetts to name their portions as well.

“I’m proud of Nebraska for taking this step to link arms with our neighbors and fellow Americans and be part of a national tribute to our heroes,” said Nebraska Department of Veterans’ Affairs (NDVA) Director John Hilgert.  “This highway runs from coast to coast, crossing widely different terrains and connecting very different people, yet we remain united in our desire to pay tribute to our heroes.  That is a powerful message.”

The US-20 segment running from Fort Robinson State Park to Hay Springs will retain its name as Crazy Horse Memorial Highway.

A list of Nebraska’s currently named highways and bridges is available here.