Word War I was known as the “Great War” and the “War to end all wars”. Nine million soldiers lost their lives and 21 million more were wounded. The unprecedented carnage saw the first use of chemical warfare, flame throwers, tanks, and fleets of combat aircraft. It also saw the introduction of the use of X ray machines, blood banks, and guide dogs. The war changed the world and also changed Nebraska.

On this one hundredth anniversary commemoration of World War I we invite all Nebraskans to learn about the contributions of the men and women of our state and the events that transpired that changed our state forever. A century has passed since the First World War, but shadows of the war remain: such as Offutt Air Force Base, named after an Omahan who was killed in France, and Memorial Stadium of the University of Nebraska, dedicated to all who gave their lives in the Great War, including Roscoe “Dusty” Rhodes, the Captain-elect of the Nebraska football team of 1918, who also died in France.

We hope you find this site educational, meaningful, and that it leaves you with an appreciation of those Nebraskans who answered their country’s call. Whether they served on the “home front” or indeed went “Over There,” Nebraska and its people played an important role in securing ultimate victory and establishing the United States as a world power.

John Hilgert, Director of the Nebraska Department of Veterans' Affairs

Last night at this municipal... Shortly after World War I, a group of ex-servicemen were discussing what the State might for the returning veterans.  Dwight Griswold, then a member of the State Legislature (later Governor and United States Senator) suggested that a fund be... For a few years, the Antioch vicinity was one of the most important potash-producing regions in the nation. Antioch grew from a small village to a town of about 2,000. When the First World War broke out, the United States was cut off from...

From the Battlefields of France by General John J. Pershing 1918

When you come back (and you will come back, there's the whole world waiting for you)

Oh! How I hate to get up in the morning 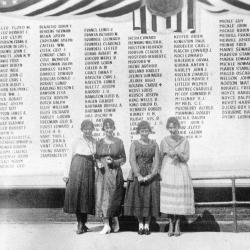